Benrus was founded in New York by Benjamin Lazrus and his two brothers and took its name from the first syllable of his name and the last syllable of the family name. The three young men combined $5,000 in savings and started importing Swiss watch movements and casing them in New York City. They headquartered the fledgling company in the iconic Hippodrome building, nestled in the jewelry district and what is known to still be the “heart” of the City. Today, the company’s headquarters remains in the same location. BENRUS launches a marketing campaign centered on one of the world’s biggest celebrities at the time, Charles Lindbergh. The Airman is a watch with incredible presence, known for its cut-corner case with stylized eagle heads in black enamel in each corner, with hours set in a ring of deep cobalt blue enamel on the bezel. Introduced in 1929 and priced at $37.50 it was dubbed as the official watch of National Air Transport, which later became United Airlines. In the same year, BENRUS develops a sportsman's watch, which was worn and promoted by one of the greatest baseball players of all time, Babe Ruth. In keeping with the art deco style of the time, this gold-plated men’s wristwatch measured only 33.5mm. Featuring a design style reminiscent of the architecture and automobiles of that moment these proved to be some of the most popular BENRUS styles sold. After the 20s and 30s, pilots and the airline industry were enamored with watches, such as the Airman, and looked to BENRUS for well thought out and designed timepieces for their professional use. The Sky Chief was the evolution of BENRUS’ experience and the needs of pilots wrapped into the company’s first chronograph. With pilots relying on their timepieces for all navigation tasks, the Sky Chief with its elongated hash marks and totalizers gave pilots the tool they needed on their wrist. The Sky Chief proved to be so popular for all the major airlines at the time that they started to use the slogan “Official Watch of Famous Airlines” and it doesn’t seem like anyone disagreed. BENRUS coined and trademarked the name Dial-O-Rama in 1956 and started production of this incredibly fun jump hour design. While the movement was not made by the brand, everything else about the watch exuded the forward and style conscious thinking BENRUS exemplified. While there were around 5 or 6 different dials, the first and most sought after was the Chevron dial, which came to exemplify the model line. While the movement was derived from a jump hour design from the 30s BENRUS was one of the first to revive the format in the late 50s through the 60s in what is called a digital "actual number readout" format. Unlike competitors, BENRUS housed the movement in its dust and waterproof housing making it not only fashionable, but also more durable. It remains a collector favorite for its quirky style. While not the originator of the wrist alarm, BENRUS saw the opportunity to bring the benefits of an alarm-based wristwatch to its wide audience. With multiple styles from dress to rugged, the brand made the wrist alarm accessible to many. These proved to be some of BENRUS’ most popular watches of that time, especially in the days before digital watches and cell phones existed to remind us. In the early 1960’s the U.S. military upgraded their existing field watch designs to address the needs of our soldiers in the field. BENRUS was the sole winner of the MIL-W-3818 contract to produce a field watch for our soldiers in Vietnam. The brand produced the DTU-2A (MIL-W-3818) field watch for the military from 1964 through the late 60’s. One can find countless photos of our brave soldiers wearing the original simple field watches, which were sought after in both their steel and a later plastic version (MIL-W-46374). The MIL-W-46374 version is believed to be the first military watch constructed in plastic. This version is believed to be the first military watch constructed in plastic and was designed as a watch that could be widely distributed to all branches of the military and could be disposed of when broken and replaced with a new unit instead of repairing. While BENRUS joined its fellow brands of the time with the ESPA cased Ultra Deep Compressor, the standard Ultra Deep was an equally popular design for its sleek simplicity. While not the only company to use this case, the very clean dial and bezel design made it the perfect divers’ tool with easy-to-read indices and an ample 666-foot depth rating.

With the continued success of the Ultra Deep models, which were varied in design and housed in different cases, BENRUS took the Sea Lord into new territory by designing a concurrent line of watches, which added more depth in models ranging from full on dive pieces to more dress-oriented models while retaining the same case. The more standardized case with different bezel and dial options developed later on within the brand. The Sea Lord models were available throughout the 60s-70s. 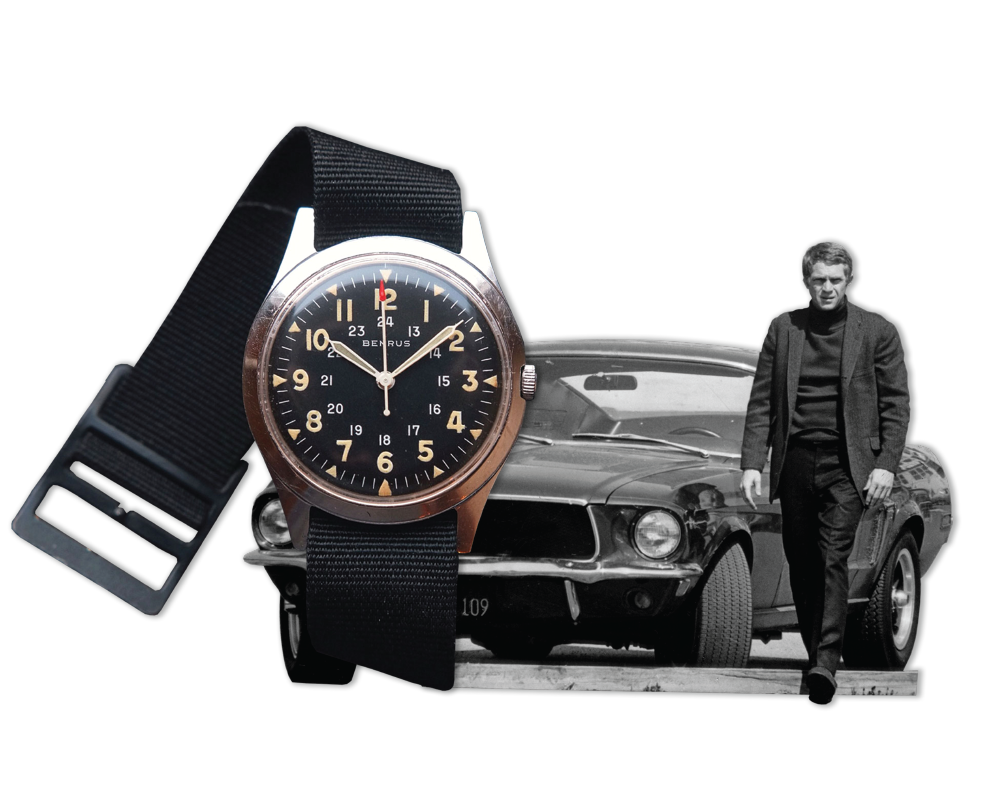 An excellent example of BENRUS’ ability to provide a model that suited many buyers, the design remains contemporary in styling and was offered in many varieties ranging from full dive watches all the way to housing some of BENRUS’ first electronic movements (prior to quartz). The cushion case was a departure from the standard round watches of the time and remains a favorite of collectors today. The most iconic military watches of their time. Introduced in 1972 in response to the MIL-W-50717 military contract, this watch was designed in response to the military’s need for a highly robust watch that could be provided to UDT, Navy Seals and special operatives in the field for deep diving and special operations. This watch was produced from 1972-1980. The Type II model was produced in conjunction with the Type I and had a 12/24-hour dial more suited to soldiers and operators in the field. Never made available for sale to the public, we recently reissued the Type I for regular use. Driven by the past but motivated by the future, BENRUS reignites its storied history creating reliable and quality timepieces for the everyday hero. BENRUS looks forward with special edition reissues and innovative designs, becoming an essential staple piece for generations to come.